It’s Worth Celebrating the Freedoms of the Fourth - July 3, 2020

News from the Center: Digest 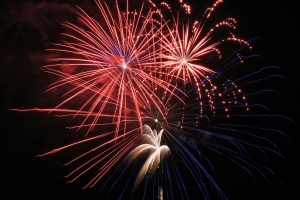 This Saturday the country will celebrate the Fourth of July, a time when Americans still publicly cherish and celebrate the freedoms that they’ve been privileged to possess. It’s a time when we honor the things that make America special and, in fact, unique in this world. It’s a time when we come together, in spite of our country’s failures and our many differences, and honor what makes our country different. And what would that be exactly? Many today are trying to sell the notion that nothing about our country makes us “unique” or honorable. But is that true? Of course it isn’t! In fact, I’d like you to take the time right now to be thankful for a country that did some incredible things for you. No matter what your station in life at the moment, things like these have rarely, if ever, been done before.

Those who founded this country did the following:

(1) They organized a country based on the self-evident truth that people, as creatures of God, all “are created equal, that they are endowed by their Creator with certain unalienable Rights, that among these are Life, Liberty and the pursuit of Happiness” (Declaration of Independence). Such rights were to be virtuously engaged and constantly striven for “freely” without need of coercion. To be sure, not living up to those principles has caused our country tremendous turmoil, but the fundamental truth remains and still calls all freedom-seeking people to itself.

(2) They not only realized the inherent dignity of all people, but also recognized the depth of the depravity of all humanity, themselves included. Who wins a revolution, writes a constitution, and claims a victory by limiting one’s own power? People who know that liberty for all is more important than personal power for some, that’s who. This truth makes America as a country unique to this day.

(3) Finally, they realized that the American experiment rises and falls on the idea with which the Constitution begins, “We the People.” This statement envisions free citizens in charge of our lives as capable, competent, self-disciplined, religiously-motivated people living freely for others just because it’s the right thing to do. In the biblical dichotomy of “give to Caesar what is Caesar’s, give to God what is God’s” (Matt. 22:21), America was the first and only country that limited government types. It even gave the ultimate “Caesar-ship” to individual citizens with a Bill of Rights to keep power-hunger politicians in their place.

All of this was pretty special then, and, in the midst of the turmoil of the last several months, it remains even more special today . . . if we can keep it. Reverend Peter Marshall, Chaplain of the United States Senate for a short time in the 1940s, said this about America’s freedom in action: “May we think of freedom not as the right to do as we please, but as the opportunity to do what is right.”[1] Wise words.

So, while July Fourth is rightly called “Independence Day,” I want you to remember that exercising our freedoms is not libertinism, a “do as I please” attitude subject to no moral code or no civil concern above oneself as the final arbiter. On this Fourth of July, let’s prayerfully and thankfully celebrate those who sacrificed so much so that we can have the freedoms that we have today. And let’s realize that for such freedoms to endure, we must understand that our healthy “independence” is rooted and empowered by these three things: (1) our dependence on God in all things, (2) our interdependence with each other in community (e.g., family, church, neighborhood, city, and country), and (3) our humble, steely-eyed willingness to be independent and even “go it alone” for ourselves and for others when God’s fundamental, moral truths are one the line.

While the resurrection freedom of Good Friday and Easter Sunday is the only enduring, eternal freedom in the world, it is a precious thing to have the temporal freedoms of America as well. Such temporal, constitutional freedoms free us to be faithful to God on His terms and to others without coercion or fear. That freedom was worth fighting for then, it is worth celebrating now, and it is worth exercising in the future. A blessed 244th Independence Day then to you all and may there be many more to come!

The Rev. Dr. Gregory Seltz is executive director of the Lutheran Center for Religious Liberty.

Discover more about a dangerous agenda for America’s institutions with Dr. Uwe Siemon-Netto. Click here to listen to a recent interview.

“O Merciful Father in heaven, from You comes all rule and authority over the nations of the world for the punishment of evildoers and for the praise of those who do good. Graciously regard Your servants, those who make, administer and judge the laws of this nation, and look in mercy upon all the rulers of the earth. Grant that all who receive the sword as Your servants may bear it according to Your command. Enlighten and defend them, and grant them wisdom and understanding, that under their peaceable governance Your people may be guarded and directed in righteousness, quietness and unity. Protect and prolong their lives that we with them may show forth the praise of Your name; through Jesus Christ, our Lord. Amen.”