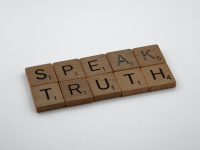 We talk about racial justice, social justice, gender justice, ethnic justice, economic justice, and don't forget climate justice. And it all sounds good until you think about what's going on. For it ends up in equity rather than equality, and to accomplish that true justice must be trampled underfoot, for equity can only be accomplished by force.

Our truth worth is inherent to our humanity, an idea already mocked by abortion, which makes a child's worth totally dependent upon what another person thinks of her. The claim for special justice, is just a finger on the weights, it's the demand that someone else treat you the way that you demand to be treated. And that includes the demand to take from others their money, their status, and even their free speech. And no longer do you have any individual worth at all, for your identity can only be found in what groups you claim membership in. No wonder girls and boys are "transitioning" at such high rates. Especially suburban boys and girls who might feel as if a new gender identity is their only way to have a seat at the table of intersectional power. Or, we might think of the new, and this is absurd, Four Star Admiral who wears a dress.

If there's a person who must buckle, who must speak the lie, who must grovel, it is the Christian . . . I mean, actual Bible-believing Christians.

Now, this can all be confusing, but perhaps, it's best to strip away the modern lingo, and see it for what it is: just another version of communism, another assimilation into the Borg, where an individual is not a member of a family, but of the commune, where the church is supplanted by the state, which is all-encompassing. Indeed, this assimilation has been remarkably quick. How quickly everyone began to say, in monotone unison, that two men can be married to each other, followed by polyamory and all the rest. How quickly we fell into the idea that a girl could miraculously become a boy, albeit with the help of puberty blockers, hormone treatment and mutilating surgery.

What we see is a war on nature and a war on our humanity, which is a war on our dignity, and upon all of our natural rights. Every other form of justice is simply a matter of raw power, of forcing the other to be quiet, and then to say that 2 +2 = 5. The natural rights of life and liberty are stripped away, as is the free exercise of speech, which some groups claim to be hurtful. This kind of justice is not justice at all, but simply another form of tyranny in which the masses are divided against one another, and then incorporated once more into the commune, where the rules of justice change every day according to the pleasure of those in power.

And, there's no way around it, except for the truth spoken with courage. Except for people everywhere to say that the emperor has no clothes and is in fact an empress. Tyranny becomes as people censor themselves. That is why I found it so heartening when Congressman Jim Banks tweeted that Rachel Levine is actually a man. Simple truths must be spoken, and if not, then perhaps we do not care about the liberty of which we have so often talked. And no, it is not soldiers who preserve our liberty. They defend the nation, surely. But liberty will be won or lost at home, in school boards, in editorials, posts, businesses, any place that there is a microphone, any place where people are gathered, and can hear the truth. Freedom is preserved by people speaking freely, and speaking the truth that is obvious, so obvious that the tyrants must suppress it, lest their collective construct be exposed as the power hungry sham that it is.

The Rev. Dr. Peter Scaer is chairman and professor of Exegetical Theology and director of the M.A. program at Concordia Theological Seminary, Fort Wayne, Ind.

Learn more about the relationship between abortion and transgender activism in a recent Issues, Etc. podcast with Nathanael Blake of the Ethics and Public Policy Center.

“About 1 in 4 women (24%) will have an abortion by age 45.” Focus on the Family offers horrifying statistics on the unborn.

“Thanks be to God for the Law of both the right-hand kingdom and the left. On the one hand, lives are saved temporally; on the other, eternally.” – Andrea Schmeling