NEWS FROM THE CENTER FRIDAY DIGEST November 26 - Intimidated by the Powers that BE? Humbly, Courageously, Speak the Truth in Love! 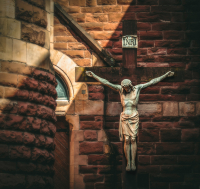 I remember getting off the plane in New York City as a mission-planter in Manhattan back in the 1990s. We were called to evangelize the Hell’s Kitchen on the West side to start a church. I was thrilled and excited, but truth be told, I was also anxious and a bit afraid. Wouldn’t you be? Be honest. I felt exhilarated like the disciples in Mark 13 when they said to Jesus, “Look at these beautiful buildings!” Only to receive Jesus’ “reality check” when He said that none of these buildings would last. If we can be overwhelmed by mere buildings and the power of those who built them, how shall we face the “principalities and the powers” that seek to dominate even the powers that be?

It’s “Christ the King” Sunday time, the final Sunday in the liturgical church year where we are reminded that Jesus Christ has already won the eternal victory for us all over sin, death, and the devil himself. In Christ, all history is moving purposefully toward that moment when we will see with our eyes what we already know to be true by faith. So, as we face the modern challenges of being followers of Christ, there are two truths things to bear in mind. One is the reality that in this world you will have trouble (John 16:33). At times, we all will be intimidated, overwhelmed, or afraid because there is an even deeper source to our adversity than mere circumstance. Our battle is ultimately “not against flesh and blood, but against the rulers, against the authorities, against the cosmic powers over this present darkness, against the spiritual forces of evil in the heavenly places” (Eph. 6:12). Wow! But, second, in full view of that overwhelming reality, we can face whatever comes because our Savior Jesus is the resource, strength, and power for the lives of all who put their faith in Him. Why? One “little word” from God can fell the principalities and powers, and God’s Word—His Law, His Gospel—saves.

So, what do you do when you are intimidated by the powers that be, the forces we see? What happens when they can demonize, caricature, intimidate, and destroy? Give to “Caesar”? Honor “Caesar”? What happens when he goes rogue? In a democracy, it’s hard to imagine that Caesar has gone rogue.  But when legislatures are cheering legislation that allows people willfully to kill children up to the day they were born even after the ninth month, what can one say but “Caesar” has gone rogue. When “Caesar” can publicly demote the Church amidst a global crisis with threats of force and ridiculous fines, reclassifying it as a “nonessential” institution for our culture, “Caesar” has gone rogue. When public officials and judges can literally stand against the clear moral teachings of the Bible, proclaiming that men are not men and women or not women, that people are only what “they say they are” irrespective of God’s created ordering of things, Caesar is out of control and in many ways our culture is losing its mind. What can one say when the platform of one of the political parties in the freest country in the world, literally targets the church because of its moral teachings, seeking to legislate the Church into submission, while, the other party, faced with the opportunity to defend or protect the Church properly against such attacks, shrinks back from the task? What can one say when government and media can literally demonize people who merely want to defend their right to educate their children in the values of their faith, while also lionizing the disastrous sexual libertine lifestyle and its effects that are ravaging relationships across the country? What can we say? We can speak the truths of the Bible in love.

The battle today is not ultimately about politics, economics, or culture. The battle is for the eternal souls of people. To that end, the Bible actually paints the scope of the conflict as even worse than the problematic issues of the present day. Behind it all is evil, rebellious principalities and powers, seeking to corrupt and destroy us. And if you are fearful due to your incapacity before such powers, sadly, the truth is that your vulnerability is even worse than you can imagine. But, especially then, as you bring your fears to the foot of the cross, as you put on the whole armor of God through His word, the power that you have to face those fears IN CHRIST is even greater than you can envision too.

So, in view of the reality of the principalities and the powers, and even the powers that be, what can we do? We humbly and courageously learn to speak God’s enduring truth in love. We engage the world God’s two ways (reflecting His preserving work and proclaiming His saving work). We can boldly speak of God’s creating and ordering of the world. We can humbly speak His Law because we are just as broken as the world and boldly share His Gospel because His grace is for all. We can differentiate the work of the State from the work of the Church so that each can do the work God intended them to do. We can remind others that in a healthy society we don’t put our trust in “princes, politicians, and magistrates,” even though we honor their work of curbing sinful, outward behavior, while encouraging each other to freely putting God’s Word to work in and through our lives for others. We can strive to fulfill our vocations in service to others as Christ himself serves us.

Especially now, we can strive to use the freedoms that God has given us to properly locate “Caesar’s sphere” while expanding the Church’s Law/Gospel voice in the public square for all. We can encourage each other to take up our responsibility anew to educate our children in the values and virtues of our faith, so that all might come to know there’s nothing to fear when God is on your side with His Word as one’s guide.

The Bible says that things are worse, more out of control, than one can imagine because of our sinful incapacity to save ourselves. And yet, in Christ, things are better than one can imagine because God Himself has made possible eternal life and salvation for all through His Son, Jesus. So, in view of the challenges of the moment, as God’s people we especially are called to speak the truth in love with humility, grace, and courage. That’s the “Christ the King” perspective, a view from the one who lived and died and rose again for all, empowering His own to face and overcome whatever may come our way . . . one who says, “Take heart. I have overcome the world” for you!

The Rev. Dr. Gregory Seltz is the executive director of the Lutheran Center for Religious Liberty.

How does the “average” person speak up for life and empower others to do the same? Listen to LCMS Life Ministry’s podcast “Friends for Life,” as host Stephanie Neugebauer talks to college freshman Anna Young about speaking up for life while juggling schoolwork and extracurriculars.

Pastor Michael Salemink of Lutherans For Life joins Pastor Evan McClanahan to look at the gift of marriage.

“Every generation of Americans, from the beginning, has had to answer for itself the question: how should we live? Our answers, generation after generation, in war and in peace, in good times and bad times, in small things and in great things through the whole range of human affairs, are the essential threads of the larger American story.” – Christopher Flannery