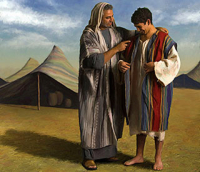 Welcome to “Word from The Center” MONDAY, a devotional word from the Center of our faith, Jesus Christ, with reflections on His Word. I’m Gregory Seltz. Today’s reading is Genesis 45:3-7, where the Bible tells us of this event toward the end of Joseph’s life:

3 Joseph said to his brothers, “I am Joseph! Is my father still living?” But his brothers were not able to answer him, because they were terrified at his presence.4 Then Joseph said to his brothers, “Come close to me.” When they had done so, he said, “I am your brother Joseph, the one you sold into Egypt! 5 And now, do not be distressed and do not be angry with yourselves for selling me here, because it was to save lives that God sent me ahead of you. 6 For two years now there has been famine in the land, and for the next five years there will be no plowing and reaping. 7 But God sent me ahead of you to preserve for you a remnant on earth and to save your lives by a great deliverance.

WHAT OTHERS MEANT FOR EVIL!

I’ve been in Washington, D.C., for almost 5 years now and I often say, “What I know now, sometimes I wish I didn’t know.” I never believed that government was the source of the needed solutions for the big problems in life, and now I’m sure of it. The kinds of solutions that we need today are those which are resourced in the things of God and of faith, things rooted in and resourced by God’s love for us to be shared with all on His terms alone. Unfortunately, even in the most free country in the world, thanks to the providence of God, I now see that more and more people DON’T believe that, especially amidst the powers that be in places like Washington where they often socially and politically sneer at those who do. That’s why this lesson in Genesis is so important. The story of Joseph is one that reminds us that God’s love and faithfulness are always to be counted on, even in the midst of the transient trials of the day or the disfavor of the fleeting political powers that be. We, as people of God, need to be reminded of St. Paul’s words in Romans 8:28, “We know that in all things God works for the good of those who love him,” even when people mean evil towards us.

The story of Joseph is an example of the power of faith in God’s love and providence. Even amidst unjust, unfair, or seemingly hopeless circumstances, such a faith moves us to ask the question, “Could this end up being a blessing in disguise?” The story of Joseph ends in blessing, but from the beginning it looked more like calamity upon calamity, and catastrophe upon catastrophe.  Even his blessings from God and his faithfulness to God at times got him into big trouble. His own brothers despised their father’s favor toward him so they faked his death and sold him into slavery. Even as a slave in Potiphar’s house, God still blessed Joseph. Unfortunately, amidst such favor, treachery found Joseph again. Potiphar’s wife noticed the successful and handsome manager of the house and wanted to lure him to sleep with her (Genesis 39). Joseph’s faithfulness to God and to his master, Potiphar, led to false charges from Potiphar’s wife and an unjust imprisonment for crimes he didn’t commit. Throughout the narrative, we are reminded that God is always faithful to His people, even in a faithless world. Throughout the narrative we also see Joseph demonstrate the power of faith to view one’s struggles and trials through the eyes of faith, asking even then, “Could this somehow end up being a blessing in disguise?”

Joseph’s trials and tribulations were ultimately God’s way of placing him in a position of power in Egypt to save his family and many others, and even to protect the promise that God made to bring a Savior for all through the lineage of Israel. In fact, the story of Joseph foreshadowed God’s ultimate work for us all in Jesus Christ. In the fullness of time, the destructive powers of this fallen world, which are often used for evil, accomplish our salvation through the unlikely means of the cross. Though unjustly accused and wrongly executed, the just penalty for our sins was laid on Jesus there so that we might be saved; the eternal damnation our sins deserve was endured by Him so that we might have eternal life as a gift of God’s grace, the ultimate good.

Throughout His life, death, and resurrection, Jesus Christ focused His attention on God’s Word; He focused His efforts on the saving mission of the Father; He took His trials and temptations to God the Father in prayer; and He demonstrated a “not my will but thine be done” love so that we might be saved (see Matthew 26:39). Surely, in view of the certainty of God’s love and providence for us, the voice of faith can ask this question in the midst of our own trials and tribulations: “Could God work this out toward good for myself and others?”

So, take that to heart amidst the down days, the dog days of life in this sinful world. Put to work the power of faith that trusts in God’s grace and God’s wisdom in all things, knowing that even that which others mean for evil, God can work out toward good. The events of Joseph’s life remind us that, even in the midst of real challenges, God can use them to eventually deliver a blessing to us and others.

PRAYER: Dear Lord Jesus, strengthen our faith amidst the trials of the world so that we might forever be confident in Your love and grace to see us through to the blessed end You have promised to us and are preparing for us. AMEN.