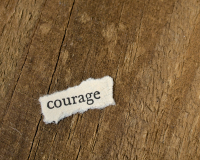 We live in an age of identity politics. On the intersectionality totem pole, there is nothing lower than a white, male, cisgendered Christian. What's remarkable is that those most susceptible to identity politics, from a statistical standpoint, are white women, Christians included. Young people, flooded by the messages on TikTok and Tumblr, are bombarded with messages that if they don't fit in socially, it may be due to the fact that they are one of the myriad of other genders. The results are horrific. Young people have been seduced into the gender madness, which has all the earmarks of a club, or rather, a cult. A change in gender signals that you are now a member of the in club.

But what is the Church to do? At least for now, for those who say they believe in the Bible, such things as gay marriage and gender fluidity are not an option, though accepting the practice or downplaying it certainly is. And no one wants to be thought of as mean, as defined by the secular church. So, again, what to do?

This is where Critical Race theory, Gender Theory's ideological sibling, steps in. Now, Christians can use all the language of Intersectionality, can employ all of the secular ideology, but frame it in a way that is purportedly Christian. It's Woke Christian Me-Tooism. But how do we know this is the case? Well, we can try a couple tests. Do those Christians who speak against systemic racism rally against Planned Parenthood's targeting of African American communities? Do those who use the language of Intersectionality go out of their way to make common cause with Christians who speak of natural marriage? And with that do they speak about fathers in the home, which is statistically by far the greatest predictor of a child's future? Do they raise the warning flag against those predators who seek to bring the LGBTQIA+ agenda into schools?

The Woke movement is fully a marriage of gender politics and a Marxist appropriation of racism, and both are aimed at the heart of humanity. It is no wonder that the founders of BLM denounced the nuclear family and railed against patriarchy. Look across at Christian institutions, our own included, and what do you see? Support of the rainbow pride is out of the question, at least for now. But so many institutions want to be thought of well by the secular world, don't want to be labeled for speaking basic truth. And how do you do that, at least for now? Buy into the vocabulary of diversity, inclusion, and equity, pretending to ignore the origin and true meaning of these words. Put on the face of justice, while never speaking to the injustice that would bring with it the unpopularity, or to put it more pointedly, to avoid speaking the kind of truth that would actually come with a cross, and the truth for which all the world will hate you (Matt. 10:22). I suppose it's a matter of who you want to be liked by, whose love you actually desire. And when it comes to the world and Christ, all love is not love.

The Rev. Dr. Peter Scaer is chairman and professor of Exegetical Theology and director of the M.A. program at Concordia Theological Seminary, Fort Wayne, Ind.

Dr. Allan Carlson of the International Organization for the Family helps you understand the importance of the natural family. Click here to hear Dr. Carlson’s recent Issues, Etc. podcast.

This year’s Gerber Baby is shedding light on the value and worth of children who have been born with congenital defects. What a gift from God!

“Every child is created by God, in His image, on purpose—for His purpose! This is the wonderful thing about human babies: ALL of us share this exact same thing in common—each of us is planned!” --Barbara A. Geistfeld, D.V.M. Lutherans For Life assistant director of volunteer relations